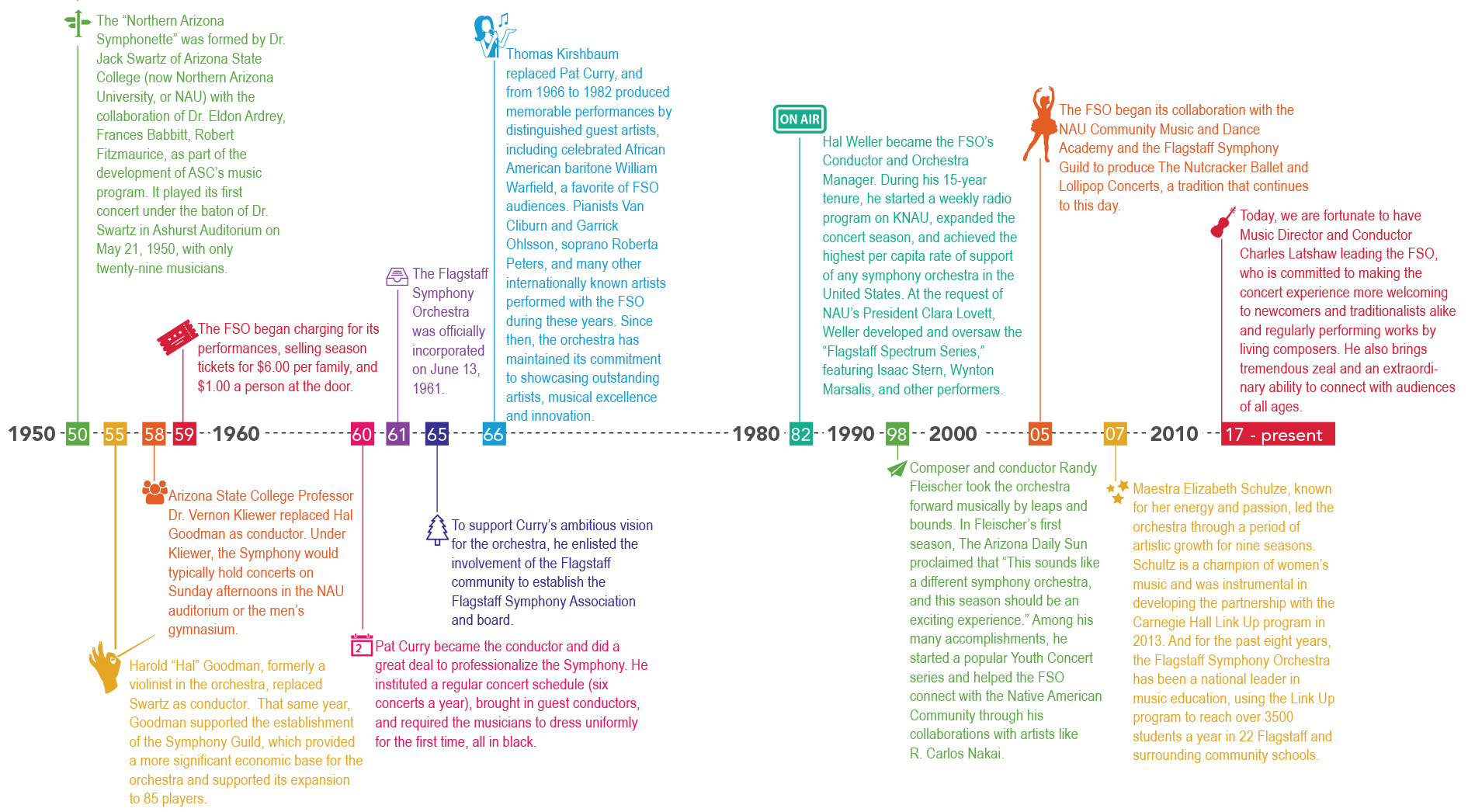 Celebrating 72 years of musical excellence this year, the Flagstaff Symphony Orchestra is the largest and most active performing arts organization in northern Arizona. Though the modern FSO had its formal beginning in 1950, the organization’s story started long before. 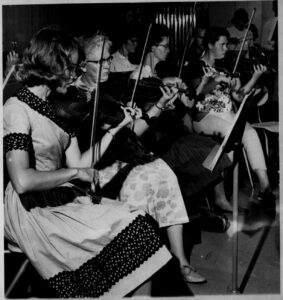 The first sounds of that musical history began in April 1899 when a group of women led by Emma Babbitt sponsored a program in the opera house on the second floor of the Babbitt building in downtown Flagstaff. A review in the Coconino Sun stated that “the affair was, upon the whole, one of the neatest conducted in our catalogue of memory and it is truly hoped that they have received enough encouragement to give us a few more just such evenings of grand pleasure.” In June of the same year, it was announced that another concert on the evening of July 3rd would be performed as part of the city’s July 4th celebration. John Philip Sousa’s “new two-step” would be played along with a medley of current popular songs. Due to the general popularity of the first concert, the orchestra raised its ticket prices from 35 cents to 50 cents (for general admission) and from 50 cents to 75 cents for reserved seating!

These two concerts were well supported by the community largely because many people moving to Flagstaff from the east wanted to continue the rich cultural lives they had enjoyed previously. The orchestra members subsequently decided, as a group, to “donate their services twice a year to Emerson School, once a year to churches, and once a year to the Northern Arizona Normal School (now NAU) which had just opened its doors in September of 1899.” Any other orchestra performance requests would be entertained for a fee and thirty days’ notice.

Other organizations were also coming into their own during approximately the same period. Percival Lowell had already established residence on Mars Hill as the location of Lowell Observatory (in 1894); the public library was established in the late 1880s; Dr. and Mrs. Harold S. Colton from Philadelphia had been visiting Flagstaff for some time before moving here and establishing the Museum of Northern Arizona (first in the Woman’s Building downtown, then moving to the building in which it now resides in 1928); and The Shrine of the Ages Choir (whose Easter sunrise services were broadcast each year from the rim of the Grand Canyon) was formed in 1933 by Eldon Ardrey. A noble cultural history was being created, and it is a tribute to these early settlers who had the foresight to develop the town the way they did for future generations. 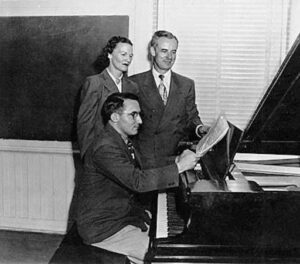 In 1950, Flagstaff was a rapidly growing city of 7,600 residents. That year, Dr. Jack Swartz of Arizona State College (now Northern Arizona University, or NAU) collaborated with Dr. Eldon Ardrey, Frances Babbitt, Robert Fitzmaurice, and others to form an orchestra as part of the development of ASC’s music program. Originally called the “Northern Arizona Symphonette,” the group played its first concert under the baton of Dr. Swartz in Ashurst Auditorium on May 21, 1950, with only twenty-nine musicians.

In 1955, Harold “Hal” Goodman, formerly a violinist in the orchestra, replaced Swartz as conductor. That same year, Goodman supported the establishment of the Symphony Guild, which provided a more significant economic base for the orchestra and supported its expansion to 85 players, a fully-fledged symphony orchestra with standard instrumentation. This was possible because of the active participation of players from across Northern Arizona, including Prescott, Cottonwood, Sedona, Cornville, Williams, Kingman, Snowflake, and Holbrook.

Arizona State College Professor Dr. Vernon Kliewer replaced Hal Goodman in 1958. Under Kliewer, the Symphony would typically hold concerts on Sunday afternoons in the NAU auditorium or the men’s gymnasium. In 1959, the FSO began charging for its performances, selling season tickets for $6.00 per family, and $1.00 a person at the door.

In 1960, Pat Curry became the conductor and did a great deal to professionalize the Symphony. He instituted a regular concert schedule (six concerts a year), brought in guest conductors, and required the musicians to dress uniformly for the first time–all in black. Curry dressed in black tie and tails and famously warned the musicians not to laugh the first time he walked onto the stage. He also took the orchestra on tour, giving concerts in Jerome, Window Rock, and Phoenix. To support Curry’s ambitious vision for the orchestra, he enlisted the involvement of the Flagstaff community to establish the Flagstaff Symphony Association and board in 1965.

Early on, the Flagstaff Symphony understood the remarkable value of educational outreach and developed several programs to enhance music education in northern Arizona. As an outreach to students, The Symphony Guild started the Lollipop concerts in the 1960s. These adorable concerts, in collaboration with the NAU Community Music and Dance Academy, have become an FSO and Flagstaff tradition cherished by the entire community.

Pat Curry was succeeded by Thomas Kirshbaum, who also had a tremendous impact on the orchestra’s development. His sixteen-year tenure from 1966 to 1982 produced memorable performances by distinguished guest artists, including celebrated African American baritone William Warfield, a favorite of FSO audiences. Pianists Van Cliburn and Garrick Ohlsson, soprano Roberta Peters, and many other internationally known artists performed with the FSO during these years. Since then, the orchestra has maintained its commitment to musical excellence and innovation.

The orchestra continued to flourish under the leadership of Conductor and Orchestra Manager Hal Weller. During his 15-year tenure, from 1982 to 1997, he started a weekly radio program on KNAU, expanded the concert season, and achieved the highest per capita rate of support of any symphony orchestra in the United States. At the request of NAU’s President Clara Lovett, Weller developed and oversaw the “Flagstaff Spectrum Series,” featuring Isaac Stern, Wynton Marsalis, and other performers.

From 1998 – 2006, composer and conductor Randy Fleischer took the orchestra forward musically by leaps and bounds. In Fleischer’s first season, The Arizona Daily Sun proclaimed that “This sounds like a different symphony orchestra, and this season should be an exciting experience.” Among his many accomplishments, he started a popular Youth Concert series and helped the FSO connect with the Native American Community through his collaborations with artists like R. Carlos Nakai.

Maestra Elizabeth Schulze, known for her energy and passion, led the orchestra through a period of artistic growth for nine seasons. In 2013, she received the Medallion in Conduction award from the Sorel Charitable Organization based on her work with the Symphony. Schultz is a champion of women’s music and was instrumental in developing the partnership with the Carnegie Hall Link Up program. And for the past seven years, the Flagstaff Symphony Orchestra has been a national leader in music education, using the Link Up program to reach over 3500 students a year in 22 Flagstaff and surrounding community schools. Schulze left FSO in 2017.

Today, we are fortunate to have Music Director and Conductor Charles Latshaw leading the FSO, who, since 2017, has been working to make the concert experience more welcoming to newcomers and traditionalists alike and regularly performing works by living composers. He also brings tremendous zeal and an extraordinary ability to connect with audiences of all ages.

Throughout the past seventy-two years, the Flagstaff Symphony Orchestra’s vision has remained the same: to share beauty and inspire joy; to create meaningful experiences for families, friends, and neighbors; and cultivate generations of artists, educators, and leaders through its music education programs.

To enrich, engage, and inspire our community through the performance of orchestral music.

Orchestral music is essential to the cultural life of our community.