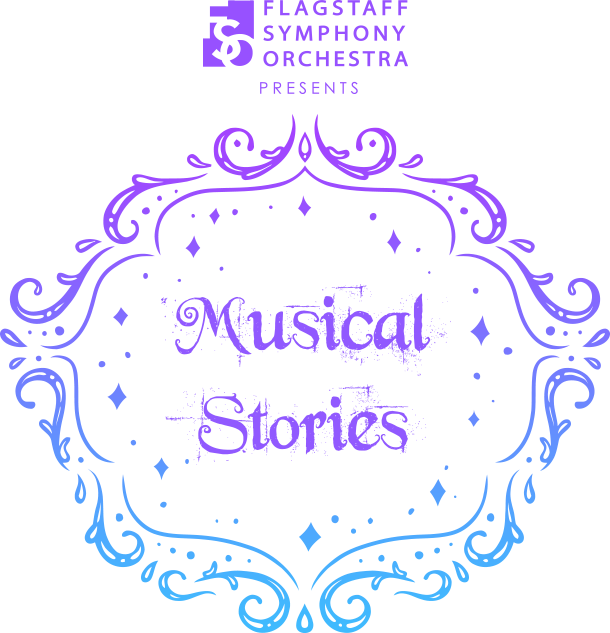 With ongoing COVID-19 restrictions, the Musical Stories program is moving to an online format only. Additionally, the music has been adjusted from the original full orchestra instrumentation to smaller ensembles that will ensure FSO musician’s and staff’s safety while still allowing for a world-class performance, with music from Stravinsky, Jaroch, and Gounod. The concert will include:

Tickets will be $25 for unlimited viewing on a single device.

For multi-device viewing you will need to purchase additional tickets for each device.

If you want to gift tickets to someone else, please contact Larry Lang at llang@flagstaffsymphony.org

We hope you enjoy “Musical Stories.” As we continue to produce virtual programs until it is safe to come together again for a live performance, we sincerely appreciate your support for these online performances. Please share this program with your family and friends, and consider giving an extra donation through our Keep the Music Alive campaign.  Thank you!

Igor Stravinsky (1882-1971) was a Russian-born composer, pianist, and conductor most famous for his three ballets: The Firebird, Petruska, and The Rite of Spring. The latter was legendary for causing a riot at its premiere, with one critic calling it “a laborious and puerile barbarity.” Stravinsky’s primitivist use of intense, driving rhythms and striking tonalities pushed the boundaries of musical composition. He was one of the most influential composers of the 20th century. He died as an American citizen, having moved to California in 1939.

The musical story of the Octet for Wind Instruments began with a dream. Stravinsky recalled,

“I saw myself in a small room surrounded by a small group of instrumentalists playing some very attractive music. I did not recognize the music, though I strained to hear it, and I could not recall any features of it the next day, but I do remember my curiosity — in the dream — to know how many the musicians were. I remember too that after I had counted them to the number eight, I looked again and saw that they were playing bassoons, trombones, trumpets, a flute, and a clarinet. I awoke from this little concert in a state of great delight and anticipation, and the next morning began to compose the Octet.”

The Octet is built on Classical forms and complex contrapuntal techniques, with influences from Bach and Haydn. Stravinsky uses the Sonata Form in the first movement, but with his own unique melodic, harmonic, and rhythmic creativity. In the second movement, a Theme and Variations on a waltz, Stravinsky utilizes the “ribbons of scales” (his phrase) variation first, then uses it as an interlude between most sections. He noted that “The finale grew out of the fugato, and was intended as a contrast to that high point of harmonic tension.” It is an exciting Rondo based on a Russian dance rhythm.

The premiere took place in the Paris Opera House on 18 October 1923, with the composer conducting. Famous American composer Aaron Copland, who attended the premiere, later wrote:

“I can attest to the general feeling of mystification that followed the initial hearing. Here was Stravinsky. . . now suddenly, without any seeming explanation, making an about-face and presenting a piece to the public that bore no conceivable resemblance to the individual style with which he had hitherto been identified … No one could possibly have foreseen … that the Octet was destined to influence composers all over the world.”

Jiri Jaroch belonged to a generation of Czech composers who entered Central Europe’s musical scene in the 1940s. He received his musical training in Jaroslav Řídký’s school of composition at the Prague Conservatoire and at the Academy of Performing Arts, where he acquired a strong working knowledge of compositional technique and became known for his independent and conscientious attitude to creative work. Jaroch focused on instrumental music, primarily symphonic and chamber works.

The most frequently played composition taken from Jaroch’s chamber music is the serene, playful, and poetic Children’s Suite for Nonet, written as a gift to the child¬ren of the members of the Czech Nonet, one of the oldest and most original chamber ensembles in the world. Jaroch’s vision for the work was to create a classical composition from a child’s view, choosing a style and length for each movement designed to engage children and keep them focused. The suite is part of The Czech Nonet’s permanent repertoire and still brings joy to children and adults worldwide.

French composer Charles Gounod (1818-1893) is perhaps best known for his opera Faust and his Ave Maria. He was a life-long Parisian, excepting a four-year stay in Rome after winning the prestigious Prix de Rome in 1839. He came from an artistic family, including an artist father and pianist mother who was his first teacher. He went on to study with Anton Reicha and later at the Paris Conservatoire. Also a lifelong church devotee who almost entered the priesthood, he was a prolific composer of sacred vocal and choral works.

Gounod wrote Petite Symphonie late in his career, in 1885, for flutist/impresario Paul Taffanel and his Societé de Musique de Chambre pour Instruments a Vent (Chamber Music Society for Wind Instruments), which premiered it in Paris on April 30 of that year. Its instrumentation is simply harmonie ensemble plus a single flute, reflecting both the somewhat backward-looking philosophy of the Societé and the importance of Taffanel. It uses the standard symphonic form from 100 years prior. The first movement has a slow introduction followed by an allegro in sonata form. The second is a gorgeous andante cantabile, almost an aria for flute. The third is a spritely scherzo with trio. The finale is another allegro that sparkles with lightness and energy. While the piece does show several Romantic-era tendencies, including long melodic lines and some surprising harmonic motion in development sections, it is at its heart a throwback to an earlier, simpler era where form and harmony were clear as day. 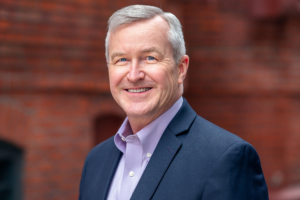