Vote for Carrie and Robert by supporting the symphony. (1 vote = $5) 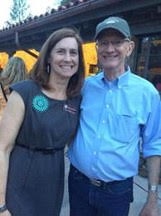 Dance-aficionados Carrie Heinonen and Robert Breunig, both from the Museum of Northern Arizona as its current and past Executive Director and CEO, have a tremendous attachment to the Flagstaff community and the Colorado Plateau region.  Robert serves on the boards of Hopivewat, dedicated to founding a new museum at Hopi, and Consensus Coconino which supports progressive political candidates.  Carrie played provincial rugby while studying in New Zealand and enjoys Flagstaff weekends with her St. Bernard. 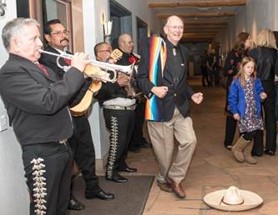 Carrie and Robert have similar backgrounds in museum studies.  While Robert centered on botanical gardens and natural history, Carrie focused on art, music, and a sideline into major brand management.  Robert and his wife of nearly 40 years, Karen, have 2 children and 4 grand children between Kuwait and Washington State. Carrie’s brother and cousin are both local chefs and restaurant owners, which likely appeals to Robert, who has not had a Big Mac in 40 years.

With a decades-long project, The Native People of the Colorado Plateau, finally being unveiled in mid-April at MNA, Carrie and Robert have agreed to put on their dancing shoes and continue the wonderful partnership between the FSO and MNA!  Thank you, and we’ll see you at Thirsty Thursday this summer for more!