FLAGSTAFF, AZ (August 24, 2018) — “Tonight, tonight, it all began tonight…” The beloved tune from West Side Story by American composer and conductor Leonard Bernstein anticipates a celebratory evening as Flagstaff Symphony Orchestra honors the hundredth anniversary of Bernstein’s birth. FSO is joining orchestras worldwide in feting the classical composer and pianist whose work spanned musical theater, ballet, opera, symphonic and choral music until he died in 1990 at the age of 72.

This tribute inaugurates the 69th season of the FSO, which includes six Masterworks concerts as well as two performances of the ever-popular holiday season opener, Tchaikovsky’s The Nutcracker ballet, in November. Maestro Charles Latshaw will conduct the orchestra at Ardrey Memorial Auditorium on the campus of Northern Arizona University, Friday, Sept. 28, at 7:30 pm.

Bernstein’s sparkling overture to Candide opens the concert, in the spirit of one of the operetta’s best-known arias, “Glitter and Be Gay.” Based on Voltaire’s 1759 story, Candide disappointed audiences when it premiered in New York in 1956, but its delightful music has always been popular and is now one of the most frequently performed orchestral pieces by a 20thcentury American composer.

The evening’s second offering has at least two Bernstein connections. Jeffrey Biegel will join the orchestra to perform In Truth, a piano concerto created exclusively for him by Lucas Richman, a contemporary American composer who studied composition and conducting with Bernstein. Biegel was complimented in 1985 by Bernstein, who said, “He is a splendid musician and a brilliant performer.” Biegel is a Juilliard graduate with a distinguished solo career. He has recorded In Truth live in performance with the Pittsburgh Symphony Orchestra.

The third program piece isn’t directly associated with Bernstein, except perhaps in its exuberance and innovation.  Mason Bates is a 41-year-old American composer who is best known for introducing electronics to orchestral works. In Mothership, FSO will treat concertgoers to stunning and beautiful audio effects not previously heard on the Ardrey stage. Bates was commissioned by the YouTube Symphony Orchestra 2011 to write Mothershipfor first-class musicians from around the world.  Presently he is the first composer-in-residence appointed to the Kennedy Center for the Performing Arts.

FSO returns to Leonard Bernstein for the concert finale. The original 1957 Broadway production of West Side Story electrified audiences with its Romeo and Juliet story set on the gritty streets of Manhattan. Featuring choreography by Jerome Robbins, lyrics by Stephen Sondheim and score by Bernstein, it immediately became an award-winning hit on Broadway as well as on screen. This was Bernstein’s fourth foray into musical theater, and arguably its success with the public surpasses his classical credentials.

When Tony, a member of the Jets street gang falls in love with Maria, the sister of his rival Bernardo, the leader of the Puerto Rican Sharks gang, one cannot imagine a happy ending. This suite of dances that Bernstein created in 1961 from the original score is by turns dreamy (“Somewhere”), explosive (“Mambo”), violent (“Rumble”) and elegiac (“Finale”).

Season subscriptions for FSO tickets are available now. For information and tickets, contact flagstaffsymphony.org or the NAU Central Ticket Office, 523-5661. The concerts are held at Ardrey Memorial Auditorium on the campus of Northern Arizona University.

ABOUT THE FLAGSTAFF SYMPHONY ORCHESTRA
The mission of the Flagstaff Symphony Orchestra is to enrich, engage, and inspire our community through the performance of orchestral music. Founded in 1950, the FSO is a regional orchestra of more than 60 musicians that reaches an audience of more than 14,000 each season. Beginning its 69th season, it is the largest and most active nonprofit performing arts organization in northern Arizona. 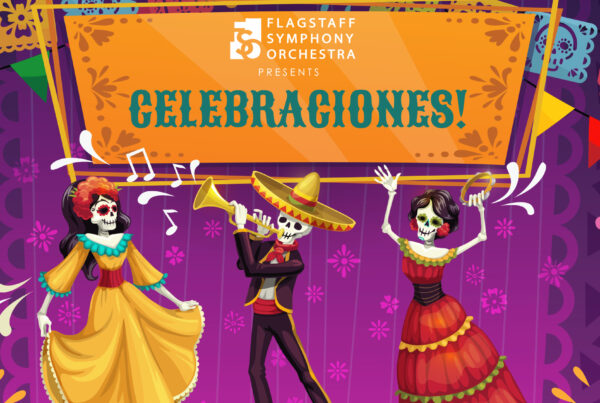