A favorite showpiece for virtuoso violinists, the Violin Concerto in D Major, Op. 77 by Johannes Brahms was written in collaboration with a longtime friend, the great Hungarian violinist Joseph Joachim. Both men participated in its premiere, Brahms as conductor, in Leipzig on January 1, 1879.

It is not known when Brahms began work on his only violin concerto, but we do know that he finished the first draft during the summer of 1878 in southern Austria, where he found inspiration in the sunny climate. Brahms, who was not a string player, turned to his friend Joachim for advice, writing, “You should correct it, not sparing the quality of the composition. . . I shall be satisfied if you will mark those parts which are difficult, awkward, or impossible to play.” The violinist complied, starting a lengthy correspondence concerning violin technique and virtuosic touches which continued until the concerto’s premiere.

Some listeners were skeptical of the new piece, believing its virtuosity would be beyond the abilities of most violinists. The symphonic scale of the concerto was difficult for audiences and critics to absorb readily. One observer, conductor and pianist Hans von Bülow, famously asserted that it was a concerto not for but “against the violin.” Decades later, the violinist Bronislaw Huberman would trump that line by saying that the Brahms concerto is not against the violin, but is instead a concerto for violin against orchestra — and the violin wins.

Brahms’s original orchestration was for 2 flutes, 2 oboes, 2 clarinets, 2 bassoons, 4 horns, 2 trumpets, timpani, strings, and solo violin. The concerto has 3 movements and is beloved for its lyrical melodies and rich orchestration.

The first movement is on an epic scale. Brahms seems to emulate Beethoven somewhat, as that composer’s violin concerto also features a first movement lasting more than twenty minutes with a broad tempo. Also like Beethoven, he did not compose a solo cadenza for the first movement, leaving that task to Joachim, after the standard chord and pause in the orchestra. By calling upon the soloist to extemporize, Brahms made it the last great concerto in history requiring the soloist to do so. Since then a number of soloists have written their own cadenzas, among them Rachel Barton Pine, who will perform hers during the FSO concert on September 25.

Surprisingly, in the second movement Adagio, Brahms introduced the main theme in the voice of the oboe, which greatly annoyed some virtuoso violinists, who had to cede the spotlight  for an extended oboe solo.  One 19th-century violinist so objected to this that he refused to play the work. Joachim, however, recognized that the oboe passage provided an appropriate contrast with the violin and did not protest. The pastoral theme begins in a setting of woodwinds led by the oboe. The violin enters later, ornamenting the theme over a string accompaniment. The calm ambiance gives way to a stormy middle section which eventually returns to the pastoral setting.

The concerto ends with a vigorous Andante finale of great lyricism and rhythmic drive.  Its unmistakable “gypsy” flavor is a nod to Joachim’s Hungarian roots. This great concerto is a tribute to Joachim, to whom the concerto is fittingly dedicated.

Familiar photographs of Brahms in grand later life portray his enormous beard, broad waist, piercing gaze and ever-present cigar.  But Brahms first began to grow his famous whiskers in 1878, so we must imagine him as beardless with long swept-back hair while he composed the violin concerto.

Can’t wait for tomorrow’s concert? Treat yourself to a ‘Best of Brahms‘ video. See you tomorrow night at Ardrey! 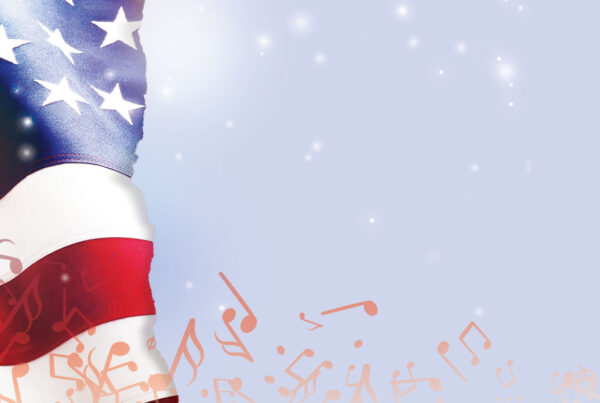 Celebrate Fourth of July for free!