Some people are born prodigies. Rachel Barton Pine says she “nagged for a violin when I was 3, and by age 5 I was signing my kindergarten papers ‘Rachel, violinist.’ That was the core of my being.” As a child, she would set stuffed animals on the couch; step atop the coffee table, perform and bow. This prepared her for real performances, she said, and throughout an acclaimed solo career she has not suffered from stage fright.

Born Rachel Barton, by the age of seven she was performing with the Chicago String Ensemble. She was just ten when she debuted in a televised broadcast with the Chicago Symphony conducted by Erich Leinsdorf.  Eight hours of daily practicing necessitated home schooling. “I did all of my college/conservatory level work, orchestra, chamber music, music history and all of that during my teen years and finished my formal training at the age of 17,” she said.

Her working-class family in Chicago had a hard time making ends meet, so Rachel began playing professionally in her early teens, becoming the family breadwinner. With the tutelage of Roland and Almita Vamos of the Music Institute of Chicago, at 17 she became the first American—and youngest—winner of the Gold Medal in the International Johann Sebastian Bach Competition held in Leipzig, Germany.

When she was 20, and on the brink of a major career, Rachel was severely injured when she was dragged by a commuter train and run over, severing one leg and mangling the other. A benefit concert for her was organized by Daniel Barenboim, the conductor of the Chicago Symphony Orchestra, demonstrating the esteem in which she was held by the classical music community. Eventually winning a jury verdict to compensate for her injuries, her recovery required years of surgeries and physical therapy.

Returned to health, Rachel Barton began an illustrious profession of worldwide performances with major orchestras, solo recitals, festivals, and recordings, dazzling audiences with her virtuosic technique, lustrous tone, and infectious joy in music-making.  Playing a prized 1742 Guarneri violin that is on permanent loan to her, she can express anything on the emotional spectrum, performing many kinds of music. But her primary voice has been described as an “excellent glass of red wine—full-bodied, rich, and complex.”

In 2004, she changed her name by marrying Greg Pine, a computer entrepreneur and former minor league baseball pitcher. They have one daughter and live in Chicago.

Recently Barton Pine completed live performances of Paganini’s ‘24 Caprices for Solo Violin’—a series of virtuosic pieces so technically challenging that very few violinists perform them in sequence. She has recorded 24 albums and travelled with the world’s most prestigious ensembles, earning many awards along the way. As part of its Masters Collection, Carl Fischer Music recently published a book of cadenzas and virtuosic encore pieces composed by Barton Pine, as well as her arrangements of other works for violin and piano, making her the first living composer and first woman to be so honored.

Since 2001 she has run a foundation bearing her maiden name (Rachel Elizabeth Barton) to promote the study and appreciation of classical music. The foundation prepares music curricula on black composers, loans high-quality instruments to deserving young musicians, and provides grants to students and young professional musicians.

In addition to her orchestral work, Barton Pine performs chamber music as part of Trio Settecento, an ensemble that uses period instruments, and with the Jupiter Chamber Players.

But classical music isn’t her only genre. Whenever she can, Barton Pine dons black leather to indulge her other passion:  heavy metal!  Anthrax, Black Sabbath, Megadeth, Metallica, and Van Halen are among her favorite bands; she has met and jammed with a number of them. As a member of the thrash/doom metal band Earthen Grave since 2009, she performs on a 6-string  Viper electric violin.  “I discovered that a lot of the heavy metal I’d been listening to was some of the most sophisticated, compositionally, of all rock music, and very inspired by classical music,” she says.

Barton Pine credits her experience playing in a rock band with building her emotional rapport with her audiences.  “Mixing classical into the [rock] performance persuades people to give classical a try,” she says.  She performs often at schools and on rock music radio stations to interest younger audiences in classical music. “It’s not just about making sure the concert halls are well-attended or about succeeding in my profession,” she says. “It’s about uplifting people’s spirits.”

Can’t wait for the September 25th concert? Get to know Rachel Barton Pine by visiting her website or by following her on Twitter! 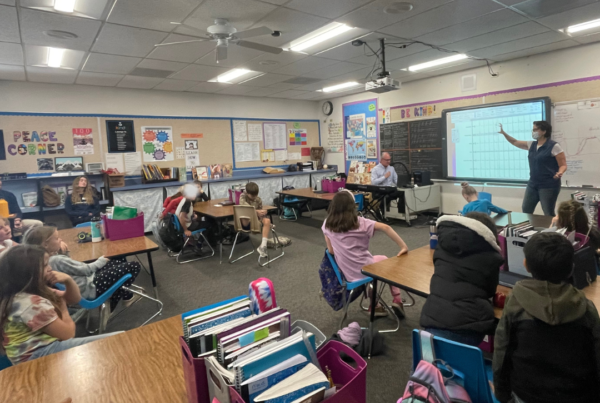