FLAGSTAFF, ARIZONA (December 20, 2017) — Flagstaff may be designated high desert in Arizona, but the splashing waves of Maine’s coastline will be evoked by the Flagstaff Symphony Orchestra in the opening piece of their Masterworks III concert on Friday, Jan. 26. Conducted by Charles Latshaw, the performance will begin at 7:30 pm at Ardrey Memorial Auditorium on the campus of Northern Arizona University; 6:30pm pre-concert conversation.

The evening opens with Acadia Fanfare, an exciting 2016 work by 34-year-old American composer William C. White. Commissioned to celebrate the 100thanniversary of the Pierre Monteux School for conductors and orchestra musicians in Maine, the six-minute tone poem musically describes the natural beauty of the forest and rocky Atlantic coastline of Acadia National Park.

Next up is the Concerto for Violin and Orchestra in D minor, composed in 1903 by Finland’s greatest composer, Jean Sibelius, at the age of 38. Sibelius was late in completing the concerto before its premiere, and the unprepared violin soloist’s difficulty with the technically challenging piece received terrible reviews. The Flagstaff audience, however, need not fear any such debacle in the hands of American violinist Andrew Sords. The Chattanooga Timesreported that the Sibelius concerto “has the potential to be a barnburner, and Andrew Sords did not disappoint.”

Mr. Sords’s virtuosic performances have earned accolades on four continents. A native of Newark, Delaware, Mr. Sords began piano lessons at 5, and switched to violin in first grade. He studied at the Cleveland Institute of Music and Southern Methodist University. Since his early competition successes he has collaborated with more than 250 orchestras worldwide. His numerous awards include the Pittsburgh Concert Society’s Career Grant, the National Shirley Valentin Award, and the National Federation of Music Clubs Young Artist Award.

Proclaiming his interest in fine food and wine and his self-described “small addiction to sushi and Starbucks,” Sords lives in Shaker Heights, Ohio.

To conclude the concert, FSO reprises one of the most popular symphonies of all time, “From The New World” or Symphony No. 9 in E minor by Antonin Dvořák. This music is so universally recognized and beloved, a recording of it was taken to the moon by astronaut Neil Armstrong.

Born near Prague in 1841, Dvořák showed early musical ability and was trained as an organist. He began composing at the age of twenty, frequently drawing rhythms and tunes from the “Bohemian music” that surrounded him. His success as a composer prompted an invitation to New York to direct the National Conservatory of Music from 1892 to 1895. While in the United States he was captivated by the “American music” of Native- and African-Americans, much as he had absorbed the folk influences of his own country.

The New York Philharmonic commissioned Dvořák to write the “New World Symphony,” which was premiered in 1893. Its immediate acclaim was described as “very possibly the greatest triumph of all that Dvořák experienced” in his life, and it became popular with conductors all over the world. The Largo theme of its second movement was adapted by Dvořák’s pupil William Arms Fisher into the widely recognized spiritual-like song “Goin’ Home.”

This concert is sponsored by current and former members of the Flagstaff Symphony Orchestra, to commemorate the service of Board members who are active and deceased.

ABOUT THE FLAGSTAFF SYMPHONY ORCHESTRA
The mission of the Flagstaff Symphony Orchestra is to enrich, engage, and inspire our community through the performance of orchestral music. Founded in 1950, the FSO is a regional orchestra of some 65 professional musicians who perform new works as well as the best-loved classical repertoire. Now in its 68th season, it is the largest and most active nonprofit performing arts organization in northern Arizona. 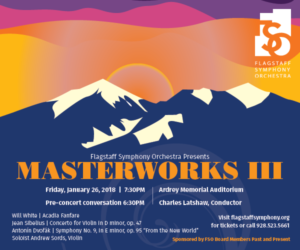